How can we enrich and develop traditional way of conducting an intercultural and interfaith dialogue? Bibliodrama (Biblos = book) offers a unique opportunity to search for commonalities and links between cultures and religions in the holy scriptures from various sources.

TEACHING SCENARIO
(a wide selection of bibliodrama/intercultural scenarios available in English, Polish, Hungarian, Icelandic and Turkish at: www.bibliodramatic.net and http://www.teatrgrodzki.pl/en/book/slowo-i-dzialanie-bibliodrama-w-dialogu-miedzykulturowym/) 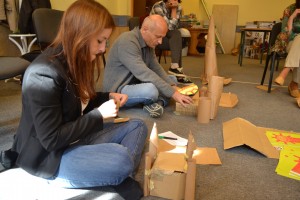 Specific intercultural aims of the workshop
The workshop aims at:
• reflecting on conflicts resulting from cultural and religious diversity;
• enhancing empathy, respect and tolerence towards people who are “strangers” for us;
• encouraging the group to learn about other religions and cultures;
• finding similarities and links between different religions;
• analyzing the essence of communication in the context of difficulties and problems faced during an intercultural encounter.

Structure of activities
1. Pulse with scarves
Pulse helps group members to focus on themselves and on their current needs. At the beginning of the session everybody gathers in a circle to share emotions and thoughts. The trainer places a bunch of scarves in the middle of the circle and invites each participant to choose the one which, through its color and texture, indicates a proper content (a completely different feeling is evoked by a light delicate fabric in pastel colors, than by a piece of thick, black material). Then, all participants talk about their feelings, explaining the choice of their material. The trainer asks them to speak also about their attitude towards so-called “strangers” – people representing other religions and cultures.
2. Warm-up: “Physical starter”
This exercise requires intensive teamwork from all the members of the group, and teaches them to react to the needs of others, at the same time, it makes them moving. All the participants stand in a circle. The trainer asks them to look at their neighbours, standing on the right and left sides, and to remember those people. Another thing to remember are three commands. “One” means moving at a normal, ordinary pace, “two” – very fast and “three” – very slowly. Participants must also remember to make use of the entire space, such that there is no unused spaces, or “holes”, and to maintain equal spacing between them. When the trainer gives the signal, the participants disperse, walking in different directions and exchanging a brief “hello” or “good morning” and a handshake with the person they are passing. The pace of movement is determined by the trainer’s commands. After a few minutes, the trainer brings this phase to a halt with the command “stop”. Now everyone looks around to find the person who was standing to their right at the beginning of the exercise. Having found them, they extend their right hand as far as possible toward that person, without leaving their place. Then, in the same manner, they locate the neighbour to the left. The participants all – very slowly, as if pulling arms – join hands. Joining with their original neighbours in this new formation, they form a knot, which now must be undone, without anybody letting go of any hands. It is usually possible to return to the original circle.
3. Studying Text – Buddhist parable
Everybody reads the text in silence and then writes down a few words describing his/her own castle. Participants can also make rough drawings of their imaginary buildings. After a while the trainer reads the text aloud.
4. Group game: Our castles
The group is given building material: cardboard boxes, brown paper, old newspapers, sticky tape. Each participant builds his/her own castle which represents their religious traditions and convictions or just the world views and beliefs. When the castles are ready, the leader plays the role of a stranger coming from far away with an important message – he speaks for this new character: Tell me about your castles. Which one is the most beautiful? (the participants answer, playing the roles of children from the story). And now, listen to me! I am offering you a great reward for all your good deeds and for being faithful to what you have believed in. But you cannot really see what is waiting for you before you cross the border of my kingdom, so you have to close your eyes. And now just follow my voice and the sound of the bell. Please keep your arms stretched forward to protect yourself from bumping into each other and into the walls. Be careful not to get hurt and not to hurt someone else. Stop when I ask you to stop. Now, the reward, the treasure has moved somewhere else, it is tempting you and calling, so follow my voice. Open your eyes and get back to reality. Look around – what happened to your castles? Put all the remains in the middle of the room.
5. Discussion
All the participants gather in a circle to share their feelings and reflections about the whole working process. Special emphasize is placed on discussing intercultural issues raised by the workshop activities.
Examples of questions facilitating the discussion:
• Can this Buddhist parable be compared with other stories we know from different religious scriptures?
• What is the main message of the story to each of you?
• Did you learn something new about your own convictions and believes?
• Are we so much focused on our own “castles” – believes, traditions, rituals that we are not interested in learning about the others?
• Will you be able to use the techniques proposed in your own educational practices?
6. Summing-up the session: Map
The group again uses colored scarves. Everybody stands up, surrounding the “ruins” of their castles and the scarves scattered on the floor. The task is to create a symbolic “map” representing elements which can be found in every religion. The trainer gives an example how it should be done. He/she chooses three scarves and places them, one by one, in three different spots, naming each of them and explaining what they represent. For instance: This big piece of red silk represents CALLING. This is how I see something tempting, alarming and calling for an answer. This small and blue one is appropriate for MYSTERY. It has the color of the sky. And the third multicolored, square scarf means RITUAL, because it reminds me of an interior of the church where I usually go. Everybody can add his/her own visual representation to the common map.

Source text
Castles in the Sand
Some children were playing beside the river. They made castles of sand, and each child defended his castle and said, ‘This one is mine.’ They kept their castles separate and would not allow any mistakes about which was whose. When the castles were all finished, one child kicked over someone else’s castle and completely destroyed it. The owner of the castle flew into a rage, pulled the other child’s hair, struck him with his fist and bawled out, ‘He has spoiled my castle! Come along all of you and help me punish him as he deserves.’ The others all came to his help. They beat the child … Then they went on playing in their sand castles, each saying, ‘This is mine; no one else may have it. Keep away! Don’t touch my castle!’
But evening came, it was getting dark and they all thought they ought to be going home. No one now cared what became of his castle. One child stamped on his, another pushed his over with both hands. Then they turned away and went back, each to his home.
From Yogacara Bhumi Sutra 4, quoted from World Scripture. Taken from Thus Have I Heard edited by Minh Thanh and P.D. Leigh.

Consult the RESOURCES and contribute your comments.

Join the COMMUNITY and share your experience with other people.